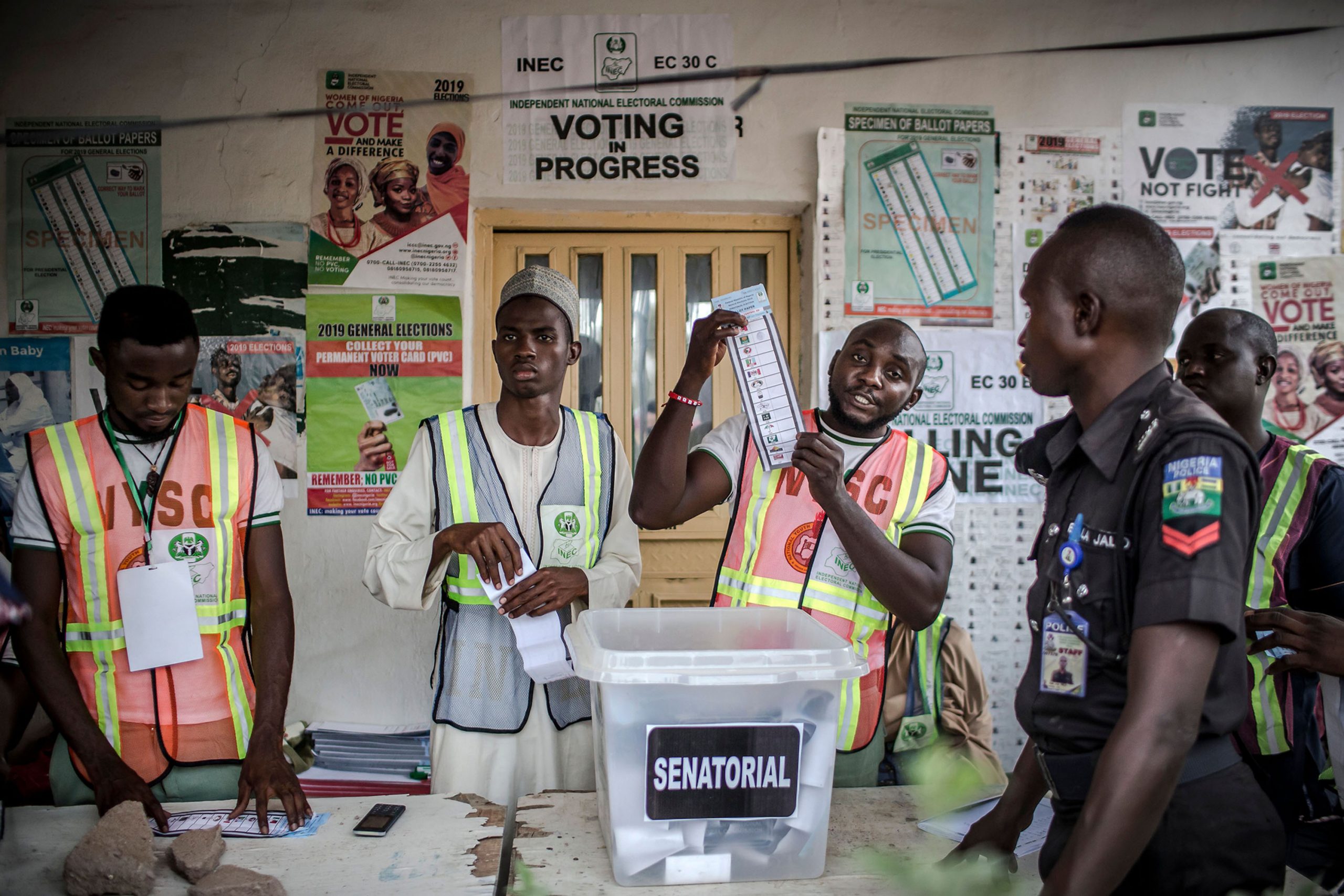 The National Assembly should rise to the occasion and compel the president to urgently fill the existing vacancies at the Commission… INEC’s ability to deliver credible and peaceful 2019 elections will be determined by the level of support and cooperation it enjoys from different stakeholders, especially the executive.

The Independent National Electoral Commission (INEC) has announced the dates for the 2019 elections. The presidential and National Assembly elections will hold on February 16, 2019 while the governorship and states Houses of Assembly will hold on March 2, 2019. This, according to a statement on their website, is to allow for proper planning by the Commission and all stakeholders involved in the electioneering process. However, it seems the proactive disposition of INEC may just be mere aspiration, as 23 months to the 2019 elections, President Muhammadu Buhari is yet to appoint Resident Electoral Commissioners (RECs).

It is no longer news that five more Resident Electoral Commissioners (RECs) of the Independent National Electoral Commission (INEC) have bowed out of office following the expiration of their terms. This brings the number of states without RECs to 33. In July 2016, there were 22 states without RECs. In the space of seven months, 11 RECs completed their terms, bringing the total number of states without RECs to 33.With this development, only Taraba, Delta, Rivers and Kaduna have substantive RECs, with 3 of these RECs also expected to bow out of service by July 2017, leaving only one state, that is Kaduna with a REC. This is unprecedented and worrisome, considering the fact that we are less than 484 working days to the 2019 elections. Incidentally, all the states with off cycle governorship elections do not have RECs; Anambra, Ekiti and Osun states. Whilst Ekiti and Osun governorship elections are slated to hold next year, the Anambra governorship election will hold on 18 November 2017; less than 176 days away.

Commendably, the Mahmoud-led INEC is visibly taking positive actions to ensure improved elections in 2019. The appointment of additional six national commissioners has no doubt boosted the capacity of the electoral Commission. Despite being overburdened with organising over 165 elections in the aftermath of the 2015 polls, the Commission is demonstrating will and commitment in ensuring credible and peaceful elections in 2019. So far, only one election out of the 165 election has been nullified by the Court. Significant reforms have been introduced as well. Internally, qualified staff of the Commission are being promoted and staff welfare prioritised. The will to prosecute indicted INEC staff involved in electoral malpractices is impressive. The 23 electoral officers indicted in the investigation into the Rivers rerun election of December 10, 2016 have been suspended and placed on half salaries pending the determination of their cases in court. In its quest to improve the electoral process and in addition to the standing committees, the Commission constituted some committees to review electoral constituencies; polling units and registration areas; suppressed constituencies; the Global Information Systems laboratory and diaspora or out-of-country voting (OVC). In addition to these laudable strides, the Commission is on the verge of completing the review of the implementation of its 2012 to 2016 strategic plan and her 2017 to 2021 strategic roadmap, entrusted to a committee set up since September 2016.

The planning for the 2019 elections commenced immediately after the 2015 elections. Unlike the 2011 and 2015 elections, where INEC had the full complement of its leadership, the 2019 election planning process is without RECs. Until December 7, 2016, INEC had only 50 percent of its leadership. It took about 18 months (1 years, 6 months) since the expiration of the Professor Jega led commission before the new leadership got the full complement of its National Commissioners. This has grave implications for electoral planning and implementation in diverse ways.

Why the RECs Are Important

According to the 1999 Constitution, the Resident Electoral Commissioners (RECs) must be persons of unquestionable integrity; not less than 40 years and shall be appointed by the president. The RECs exercised delegated powers in furtherance of the Commission’s statutory functions. The RECs are too critical to the success of elections. In practical terms, the RECs head the Commission at the state level and they provide oversight on the implementation of the policies and programmes of the Commission. The functions of the RECs at the state level are too significant that any delay in their appointment weakens the Commission and diminishes its effectiveness at the state level. Once a REC is appointed, he/she must understand the state of assignment, and this involves a deeper understanding of the electoral geography of each local government in the state; the demography and the building of a relationship with the staff of the Commission. These tasks take time and effort.

Our poor attitude towards planning diminishes our efficiency and productivity. We plan to fail when we fail to plan. This is a basic rule of project management. Our elections fail to meet standards or inspire confidence because of the poor performance attributed to the lack of effective planning. We are less than 484 working days to the 2019 elections and only four states have Resident Electoral Commissioners.

Experience shows that the Commission hosts periodic meetings to plan, design and implement policies and programmes. The RECs are an integral part of such meetings as they make essential contributions to these design, planning and implementation. As a nation, we are losing the opportunity to benefit from the intellect, skills and energy of competent and capable individuals who should be making positive contributions in the Commission. The current reality implies that the newly appointed RECs will only implement a strategic plan and an election plan that they weren’t part of its design process. Currently, the administrative secretaries head the Commission in states without RECs. Interestingly, most of the current administrative secretaries holding forth in the states will be due for retirement before the 2019 elections.

Elections are complex, sensitive, highly technical and multi-faceted. The intricacies and mechanics of election management requires high levels of planning, competencies and capacities. It is conventional wisdom that effective planning is central to the success of any election. This entails ensuring all procedural, administrative and operational issues are addressed in line with legally defined timelines. Despite its cumbersome nature, elections are defined by timelines. Failure to meet deadlines could adversely affect the entire electoral process. Consequently, all decisions relating to elections must be treated with a high sense of responsibility and sense of urgency.

Based on international standards on elections, the ability to plan, effective organisational and management structure, and the access to and adequacy of resources are requisites for successful elections. INEC has not been availed of the human capacity it requires for the successful conduct of the 2019 elections due to the non-appointment of its management structure at the state level. The failure to fully constitute INEC by appointing RECs is setting the ground stage for the 2019 elections to fail. There have been sustained calls by stakeholders on the presidency to appoint RECs in states with vacancies, for instance the Senate and other APC brethren of the president have all implored him to make these appointments but all to no avail. One begins to wonder if this reluctance to appoint RECs is a grand strategy by the Buhari administration to weaken INEC’s ability to deliver credible elections in 2019.

Our poor attitude towards planning diminishes our efficiency and productivity. We plan to fail when we fail to plan. This is a basic rule of project management. Our elections fail to meet standards or inspire confidence because of the poor performance attributed to the lack of effective planning. We are less than 484 working days to the 2019 elections and only four states have Resident Electoral Commissioners. Although the Commission is planning for 2019, however the planning and design process would have received a boost with a fully constituted Commission. I also argue that adequate planning requires assembling the requisite human asset to deliver on a task. There is an unquantifiable value in achieving unity of purpose and adopting a fully participatory approach in planning for a highly technical enterprise like elections. Our last-minute approach to election management usually results in poor electoral output. When election officials are not appointed in due time, when procurement processes are delayed, when ad-hoc officials are not recruited and trained early, we are planning to fail. Impressively, there’s a growing culture of designing strategic plans in INEC. However, its implementation will be determined by a range of internal and external factors. The reluctance exhibited by the president in appointing RECs is undermining the Commission and depriving her of the human resource it requires for the successful planning and execution of the 2019 elections.

In the life of this administration, the president has made two significant appointments to the Commission. The first round of appointments were made in October 2015 with the appointment of the INEC Chairman and five national commissioners. The second round took place in September 2016 with the appointment of six additional commissioners who were later sworn in, in December 2016. As at July 2016, 22 states had no Resident Electoral Commissioners. How come the Resident Electoral Commissioners were not appointed? The president would have utilised the opportunities to appoint RECs but he failed to do so. Considering the rigorous process of appointments to INEC, which requires Senate confirmation, it is my strong view that it was a wasted opportunity. Let’s assume the reason for the staggered appointments to INEC is to guarantee institutional memory within the Commission and create opportunity for continuity and knowledge transfer. This argument may not be tenable in relation to the RECs. In a situation where vacancies exist in 33 states, out of 37 such positions, it simply means that all the RECs will have their terms of office terminated at the same time. By this act, the president would have set a bad precedent in the annals of our electoral history. Less than two years to every general election, we will have a new set of RECs, if the terms of the former RECs are not renewed.

The 165 elections conducted so far by INEC since 2015 presented opportunities for learning, especially for the RECs who are saddled with the responsibility of superintending over elections at the state level. The opportunity has been wasted due to this non-appointment. The forthcoming Anambra, Ekiti and Osun governorship presents other opportunities.

It is usual practice for INEC to deploy RECs to states with off cycle elections as a strategy of enhancing the capacity of its staff. This peer learning contributes in no small measure in building the technical capacity of RECs in the states. The 165 elections conducted so far by INEC since 2015 presented opportunities for learning, especially for the RECs who are saddled with the responsibility of superintending over elections at the state level. The opportunity has been wasted due to this non-appointment. The forthcoming Anambra, Ekiti and Osun governorship presents other opportunities.

Is the Delay Legal?

The framers of the constitution contemplated that a president should be permitted to exercise discretionary powers in determining the timeline for such appointments. In their wisdom, they expect the president will be guided by the doctrine of reasonability in the exercise of his powers. Sadly, this is not the case. The non-appointment of RECs in 33 states with 484 days to the 2019 elections constitutes abuse of discretionary powers.

In Conclusion, we can’t afford to retrogress in elections management in Nigeria. Consolidating on the gains of the 2015 elections and charting a new course requires vigilance from every citizen. This is the price we must pay for liberty and freedom. The president should ensure appointments are made into existing vacancies at INEC without any further delay. Only individuals with high moral integrity and capacity should be appointed as RECs. The National Assembly should rise to the occasion and compel the president to urgently fill the existing vacancies at the Commission. The Senate should ensure all nominees are thoroughly screened and not adopt the take a bow model. The confirmation of RECs should adopt the precedent laid with the screening of the incumbent INEC Chair and commissioners. Such scrutiny will repose confidence in the hearts of citizens. INEC’s ability to deliver credible and peaceful 2019 elections will be determined by the level of support and cooperation it enjoys from different stakeholders, especially the executive.